When 2014 kicked in, I resolved to putting an effort to always look good when I go to work. I work the night shift and you’re probably saying, “What’s the point? Nobody would probably care about how you would look anyway,” but after feeling like shit when 2013 ended, I decided it’s time to actually stop feeling and looking like crap and start to find my own beauty.

Since January, I’ve been giving myself enough time to fix my hair and put on some light makeup before going to work. Sometimes it takes a while for me to find something nice to wear that I end up turning my closet upside down. It takes a lot of effort from what I’ve been used to but it’s an effort that’s actually been well received. I started to feel a bit good about myself especially when I get some compliments here and there.

Truth be told, I am not used to getting compliments. There was actually a point in my life when I felt like no one would notice me, really; that I’m just a fly on the wall. It’s this self-deprecating feeling that gets to me sometimes. It’s a feeling I struggle to fight—to feel invisible, not good enough—but lately I’ve been getting by.

If you’ve read my previous post, I’m experiencing what a friend pointed out to me as probably a quarter-life crisis. It’s not nice to feel lost and have no sense of direction of where you want to go and where you are actually headed. Fortunately, despite that “crisis”, I still am alive and kicking and am pushing through with my resolution.

I’ve always been a skinny kid. Up until my third year in college, people would tell me how skinny I am, etc. I never imagined myself getting fat since I got used to being regarded as skinny but after I got rid of all the stress that’s been keeping me from keeping myself “healthy”, I started to gain weight. I remember a friend’s ex casually told her that I’m starting to get some ass (and nope, they didn’t break up because of that lol.)

After graduation, I pretty much bummed myself out at home. I didn’t go out and I didn’t have any form of physical activity to keep myself in shape, so the weight I’ve gained that made me look more healthy started to become excess fats. Even when I started working, I didn’t have much of a physical activity since my work pretty much comprised of me sitting in front of the computer all day and code. I was lazy to actually do something about it up until I decided I couldn’t take it anymore.

I started hating my belly fats. And my flabby arms. I hated that I pant after a short walk because I felt heavy. And lately, I hate the excess fats because I can’t wear some of the clothes I would want to wear.

So three or four weeks ago, I said to myself, “If I actually want to feel and look good, I must put more effort into it and do something about these excess fats.”

I live two hours away from the city so four hours of my day is actually spent on my daily commute to work. I have no time and money to go to the gym so I decided to go back to bellydancing. It’s something I’ve actually done before but I wasn’t really disciplined enough to do it regularly.

Each routine is approximately thirty minutes long. I usually do all three routines during Friday, Saturday, Sunday, and Monday. For the rest of the days of the week, I do at most two routines but I make the Arms & Abs a daily routine.

I’m already three or four weeks in and I’ve already seen some improvement. Take this photo for example:

Pictured on the right is a photo of me last June 2013. On the left is a photo I took last week wearing the same Minnie Mouse top. It probably doesn’t look much different but I am starting to lose the flab on my arms.

Here is a photo of myself before and after I’ve finished the three bellydance routines today: 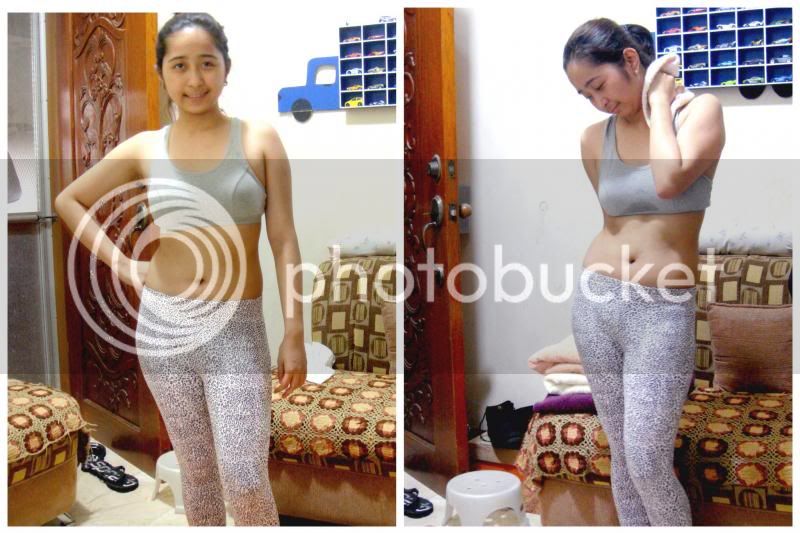 I still need to work on my lower abs but I’m happy to see that I am getting there. 😉

Apart from exercising regularly, I’ve also been cutting down my carb intake. I used to eat a lot of rice, pasta, and fries. Now I only eat them in moderation. I’ve also been craving for some veggies which is actually a good thing since I don’t usually eat vegetables.

Going back to bellydancing is one of the best decisions I have made for this year. Aside from getting back in shape, it’s not completely strenuous, I can do it at home, it doesn’t consume much of my time, and it’s cheap! I can’t wait to be fit and lean again!

What about you, how do you keep yourself in shape? Any tips? You can share them by leaving a comment below or sending a message via my contact form.

2 thoughts on “Back to Bellydancing”