Have you ever been hit by something so beautiful and powerful at the same time that you find yourself taking two steps back and you feel as if time stopped even for just a split second? Have you ever found yourself standing there just mesmerized and in awe of what had just brushed past you? It doesn’t even have to be at par with the majority’s perception of what is great or thrilling but something that captivated you to the point that you can’t even begin to describe how or why you came to that position?

I know that to some people what I am trying to describe is something a bit hazy in their point of view but to me and to the many people out there who have ever given love and support to whatever cause they’re trying to fight for, this is something bigger; something that we cherish and deem important because it’s a part of what makes us feel alive.

It all started with my recent obssession with Korean dramas after I started watching Lie to Me, starring Yoon Eun Hye and Kang Ji Hwan, last August or September of this year. And then Personal Taste (Lee Minho, Son Ye Jin) came after and Secret Garden (Hyun Bin, Ha Ji Won) followed suit and so on. I got most of my KDrama haul from my friend from work who just happened to have a collection of Korean shows and I got so hyped up especially since most of the shows were romantic comedies which were exactly my cup of tea.

After getting home from work, I’d spent most of my nights curled up in bed with the lights turned off and my netbook lying just above my belly and I would either stifle my laughter or my tears with scenes that caught my emotions.

I remember I’d just finished re-watching Coffee Prince (Yoon Eun Hye, Gong Yoo) and I just wanted to watch another romantic comedy and I asked Vienna, my friend from work, if she could suggest any other shows I could watch. She offered to give me a copy of Sungkyunkwan Scandal (Park Yoochun, Park Min Young, Song Joong Ki, Yoo Ah In) and I believe around that time Trisha also recommended on Twitter that I watch it as well (since she’s been a fan of TVXQ ever since I met her). 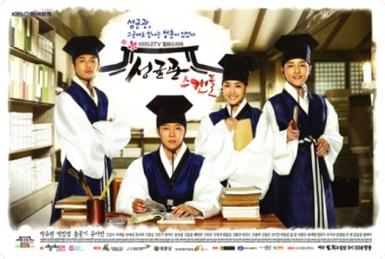 Since I didn’t have anything else to watch, I gave in and copied the drama from Vienna. The drama was so cacptivating to watch because of the four main characters, also known as the Jalgeum Quartet. The story revolves around Kim Yoon Hee (played by Park Min Young) who disguised herself as a man just so she could make ends meet for her family since her father had already passed away and her brother was sickly. She then meets an upright Lee Seon Joon (played by Park Yoochun) who later encourages her to enter Sungkyunkwan.

I have never been a fan of boy love themed stories before but Sungkyunkwan was the first ever drama that made me feel all giddy with skinship between male characters. The story line and chemistry between the four characters was just so good I was hooked right after I watched the first episode.

The first one to captivate me was Song Joong Ki who plays Gu Yong Ha because of his playful charisma and to die for glowing skin. And I found it absolutely cute how Yoo Ah In’s character, Moon Jae Shin, hiccups whenever he notices the presence of a woman. The small rivalry between Lee Seon Joon and Moon Jae Shin was also entertaining (I still laugh every time I re-watch that scene where they fight over their sleeping locations and end up pushing each other with their butts! Haha). I honestly didn’t care who ends up with who in the end! I just wanted to witness how everything would play out and most of the time I just admired the quartet.

And how can I forget the super catchy opening theme that just gives that giddy vibe whenever it plays? I often found myself humming 찾았다 at work that I used to worry someone might hear me singing gibberish since I didn’t really know that lyrics and I was just singing phonetically. Sungkyunwan Scandal was the door that led me to this fandom I am in right now.

Sungkyunkwan introduced me to Park Yoochun, which led me to JYJ (they sang 찾았다, btw), which then led me to TVXQ~

I have heard of TVXQ before because of friends (hello Trisha & Rachel) but I didn’t really pay much attention because I wasn’t into the whole Korean/Japanese thing. But after my obssession with Korean Dramas and their OSTs, I couldn’t not appreciate them especially when I first heard their Japanese song Begin which coincidentally where it all began.

The first part of the song began with Yoochun’s deep soothing voice followed by Changmin blending in with Yoochun’s voice and so on. And I was just captivated with how beautiful Jaejoong’s voice sounded at the chorus part. I kept on playing that song over and over again because it was just sooooooooo good. After that I just clicked on the related videos for their other songs and I just couldn’t stop.

Their talent pulled me in. I was rendered speechless that even though I have always wanted to write about my new found fandom, I couldn’t bring myself to because I didn’t know how and where to begin. And yes, I know I am writing about it now (heck, this post is already looong) but I feel like I haven’t fully expressed what I want to say.

I got into them post-lawsuit and sometimes I feel sad that I wish I had gotten to know about them more sooner or I wish I’d just paid more attention to my friends then (so I wouldn’t feel a bit like a loner right now *lol emoshinki*). Sometimes I actually find myself tearing up when I hear their songs back when they were still five (Proud and Wasurenaide to name a few). Other times I have this wish that they get back together as five and make wonderful music again. Always keep the faith, they say. But times like these, I don’t really know. I mean, what do I know right? I don’t know everything that has transpired so like tonight I just keep to myself and play their songs and just admire them even from afar, even for just a brief moment.

“The letters that the stars created in the night sky, I still believe that it is not just by chance.” W, JYJ

“On this street I met you by chance. Even now I don’t forget from that day on. Everything like the sad things, the things I carried in anxiety, everything through your warmth changes into warmth. Proud of your love…” Proud, TVXQ

Like Loading...
What do you do when you’ve got your fangirling mode on?
[PHILANTHROPY] How to Participate in jyj3.net’s Fan Project Donation for UNAIDS